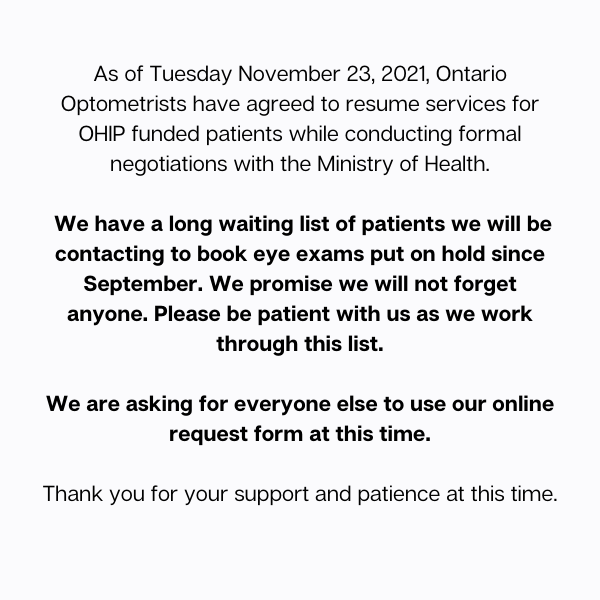 Covid-19/What to expect when you visit our office.
Skip to content

While many common allergies have people searching for treatments for skin rashes or nasal congestion, allergies can also affect the eyes in a multitude of ways. Red, itching eyes and swollen eyelids are the most common effects of allergies on the eyes, and rarely if ever pose a threat to vision apart from mild blurriness, due to overproduction of tears to help alleviate the sense of dryness on the eye.
Eye allergies are also fairly common, occurring in approximately 20% of North Americans, regardless of age, gender, sex, or family history. Common allergens are pollen, dust, animal fur, and scented items such as perfumes or shampoos and soaps. As with other allergies, eye allergies can also be perennial, occurring all year, or seasonal, such as during the early summer when grasses and trees release their pollens to be carried to new fertile grounds.
In extraordinarily rare cases, in the realm of 1 in 100,000, eye allergies can tie into serious, life threatening, pre-existing allergies, such as nut allergies. Should an allergen such as peanut oil be rubbed into the eyes, it is possible to trigger an anaphylactic reaction which would require administration of adrenaline either through epipen or paramedic injection, and transportation to an emergency room.

Symptoms of most eye allergies tie in very closely with those of allergic conjunctivitis, namely red, burning, itching eyes, excessive tear production, and inflammation of tissues around the eye, including the eyelid.
Less common symptoms, mostly related to those that suffer from perennial allergies, are chronic dark circles known as allergic shiners under the eye, as well as increased sensitivity to light, reduced night vision while under the effects of an allergic reaction. In some cases, thick mucus from the surface of the eye can be sluiced off by blinking, which can lead to white, crusty buildup on the eyelashes.

The good news about eye allergies is that for the vast majority of them, they are relieved by the same anti-histamines that are used to treat sneezing, runny noses, and coughs that are brought about by allergies. Antihistamine eye drops are also available at most pharmacies over the counter. Another treatment for eye allergies is environmental, namely removing the allergen from the environment, such as using HEPA or ionic filters to remove dust and hairs from the air, or removing yourself from the allergen producing environment, such as staying indoors during pollination season.
In cases of more serious allergic reactions, such as when the eyelid becomes so inflamed that it starts to put pressure on the surface of the eye, stronger antihistamines and non-steroidal anti-inflammatory drugs, almost always in the form of eye drops, can be prescribed by an Optometrist, as well as an oral course of medication to help reduce the symptoms of the allergic reaction. These drops and medications should be used exactly as instructed, as they are prescription medications.
In the most severe of cases, an epipen of adrenaline can be administered anywhere on a patient should anaphylactic shock occur. As stated above, the occurrence of this level of allergy is extraordinarily rare, and is almost always related to pre-existing severe allergies.